This image depicts the audience for “The Troll’s Remorse,” a duo dance using the natural Kingdom waterfall in Montville. Dylan Newcomb, Lisa’s son – and at the time an award-winning dancer, choreographer, and composer living in the Netherlands – danced with Jennifer Hanna using the pool below the falls as the set. We hid two huge speakers In the woods on either side of the falls to broadcast Dylan’s music for the dance. (Super long & fat extension cords!)

The audience, shown here excited and talking before the performance, arrived to these huge bedrocks just above the falls via a trail way above the pool and down stone steps and across a wooden bridge all built for the occasion – and still there.

Briefly, the plot: mysterious music begins from woods; audience quiets in anticipation; a beautiful woman emerges tentatively from behind a giant bedrock across the pool; shy at first, but seeing she’s alone, she calms and slips into the pool to swim; her white, flowing dress floats on water surface as she moves through the water to the lyrical sounds; gradually, music begins to swirl and rise in intensity; she’s swimming in a dream, doesn’t notice the change; suddenly, the pool below her erupts and…a green troll (!!) grabs her by the waist and pulls her under!

Their turbulent struggle soon morphs into harmony in a lovemaking pas de deux; the troll wants her completely; she must be with him in his amphibian world; she’s torn – human world/mythical realm, the known/the mystery? Reluctantly she commits to his wooing, and in swirling melodies, round and round, they disappear below the surface, whereupon of course, she drowns. Troll brings her back in great despair; floats her on the pond surface, her white gown all lacy around her. Troll, who is painted completely green and naked except for a green thong, gently gathers her in his arms and brings her body to a stone shelf at pool’s edge where he rests her shoulders. The current from the falls sways her body and gown while Troll crawls up onto huge poolside bedrock above her and, along rock surface on all fours, dances in mourning for her and their impossible love.

Troll ends in the pool holding her again and swims across, lodging her shoulders on the opposite shore. With great swirling sounds, he retreats to his underwater world and disappears. Silence all around, maybe quiet music, a few heartbeats. The woman stirs, her eyes flutter open; she sits up, rubs the water from her eyes, looks around. Like, “What just happened? Where am I?” She rises from the pool, looking all around, and gingerly steps back across the rocks, glancing behind, and disappears around the bedrock where she entered. Music closes. Finis.

The crowd – pictured here – burst into applause and cheers, while Dylan swims across the pool to meet Jennifer and take their bows.

Below is a BDN article about Troll’s Remorse:

Have an image of Waterfall Arts you’d like to share with us? Drop us a line with a picture, a memory or a caption, and we’d love to share it in honor of our 20th year. Email info@waterfallarts.org, thank you! 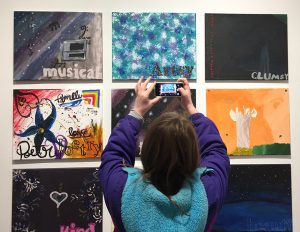 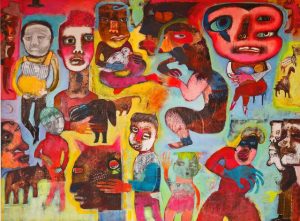 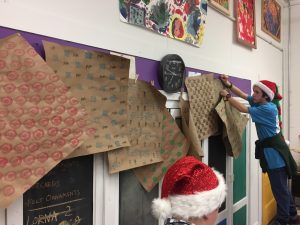 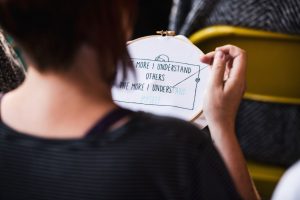 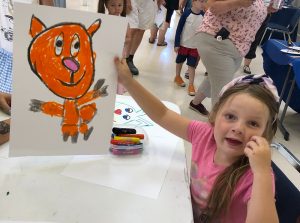 A Week of Creative Connections With Bridget, pt. 2